This Month's Letter from the Pastor 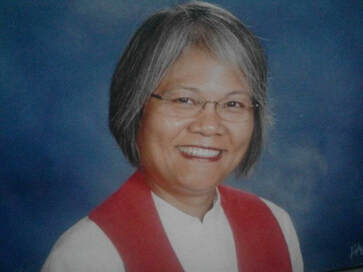 Pastor Cerna graduated from Garrett-Evangelical Theological Seminary with two Masters Degrees, one in Christian Education in 1995 and the other in Divinity in 1998. While at the seminary, she was the recipient of the Outstanding Christian Education Student Award.

Certifications, Offices Held, Leadership Roles:
Past Involvements in Community and Church:
Present Involvements in Community:
Pastor Cerna was born the ninth of ten children in the Philippines and was raised in the Roman Catholic Church. She received her call to ministry when she was a senior in high school attending a United Methodist Youth Fellowship gathering at the United Methodist Church in San Carlos City, Philippines.

Cerna is a person who loves life in all its facets. She enjoys reading, gardening, exercising, juggling, and walking around the neighborhood. She is a people-oriented person who “never met a stranger” and gains great pleasure from talking and working with people of all ages and backgrounds.

Pastor Cerna married Mark Rand on June 3, 1995. Mark was born in Rockford, Illinois, and grew up in Homewood, Illinois. He was educated at Purdue University, Lafayette, Indiana, and later at Northwestern University in Evanston, Illinois, where he earned his doctoral degree in Physics in 1996. They are blessed with a wonderful son, James Wallace, and a beautiful dog, Oreo. Pastor Cerna's favorite food is pizza. She loves to explore restaurants of all kinds, both to enjoy the food and meet people.

Personal Statement
I thank God for my appointment at First United Methodist Church in LaGrange beginning on July 1, 2020. My family and I are grateful for the opportunity to be serving with the congregation to transform the world. I look forward to our ministry together and I can’t wait to grow and mature in faith with you in Jesus Christ and to share God's love with one another and in the community and beyond. With God’s help, during the first few months of my ministry at FUMCLG these are my ministerial short- and long-term goals:
I’m looking forward to getting to know the members, learn the culture of the church, and meet people in the community. It is my prayer that we will continue to be the church that God wants us to be for the community and beyond. We are here to help!
Let us keep the faith and trust in God who sends us to serve. Let us show our love of God and others in words and in deeds. May we be faithful in following our Lord, Jesus Christ, in all that we do, and be empowered by the Holy Spirit, and be guided by Jesus’ teaching: “The first is, ‘Hear, O Israel: the Lord our God, the Lord is one; you shall love the Lord your God with all your heart, and with all your soul, and with all your mind, and with all your strength.’ The second is this, ‘You shall love your neighbor as yourself.’ There is no other commandment greater than these” (Mark 12:29-31).

​John Wesley, the founder of the Methodist Movement in 18th Century England, taught his followers to “Do all the good you can, by all the means you can, in all the ways you can, at all the times you can, to all the people you can, as long as ever you can.” Let this be our motto and commitment.